Inspire, innovate, and unlock your potential

The flagship initiative of Qatar Foundation, Education City, is unlike any other place in Qatar. Here, students and visitors will surely find something they like or enjoy thanks to the various facilities and fields across the city.

Nestled in the heart of Al Rayyan, the Education City that started off with a single school, over the span of few years, houses students from over 50 countries from all around the world. It offers great learning opportunities with various Ivy league schools and campuses such as Northwestern University, University College London, and Georgetown University Qatar to name a few.

To really get to know Education City, let's look at where it all started. The journey began in 1995 when Qatar Foundation was first established by Father Amir, Sheikh Hamad Bin Khalifa Al-Thani and Her Highness Sheikha Moza bint Nasser. The foundation aimed to achieve economic sustainability through innovations in education and research by "unlocking human potential." The city's mission also contributes towards Qatar'sQatar's 2030 vision of building a knowledge-based economy and preserving culture.

Education City was inaugurated in 2003 with the opening of Qatar Foundation's  first university, Virginia Commonwealth University School of the Arts in Qatar. From there, it grew to be the home of eight universities, including the homegrown Hamad Bin Khalifa University. Its reputation and presence have since developed to represent academic and scientific excellence; its graduates gained the skills and opportunities to take on leadership roles and tackle global challenges, such as the global warming one.

Through its recent building of Education City Stadium and the various initiatives it has participated in, the city is on its way to becoming a greener and more sustainable place. The Education City Stadium will be one of the venues for the upcoming FIFA World Cup Qatar 2022, and its design has earned it a five-star rating under the Global Sustainability Assessment System (GSAS), which is administered by the Gulf Organization for Research and Development (GORD). Some of its sustainable features include creating a climate-conscious design that eliminates the need for auxiliary heating or cooling. It also consists of an efficient waste management system and was built with sustainable materials regionally and locally sourced.

● ''The Miraculous Journey" by Damien Hirst at Sidra Medicine

Known as the "lungs of Education City," this 130,000 square meter park is for families, students, and visitors to refresh physically, mentally, and spiritually through active exercise and also allows them to explore the different flora and fauna in the Quranic Botanic Garden.

A community space for visitors to access millions of books, research, community programs, and Qatar'sQatar's heritage.

The Education City Mosque is located in the Minaretein building and is uplifted by five columns representing the five pillars of Islam. The mosque can host approximately 2000 worshipers. In addition, the building houses the College of Islamic Studies, which is an entity of Hamad Bin Khalifa University.

A beautiful multipurpose, open-air space that hosts large and significant events in Education City, such as QF Convocation, Qatar National Day, and more. 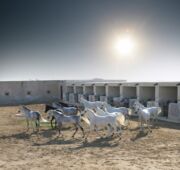 An equestrian centre focusing on preserving Arabian culture and promoting the welfare and breeding of Arabian horses.

Mathaf is a cultural institute co-owned by QF and Qatar Museums, conserving and displaying the most extensive collection of modern and contemporary Arab art.

Some of the popular activities for the public available across Education City include the Torba Farmers Market that offers organic fruits and vegetables and helps to promote local businesses while encouraging sustainable practices across the whole market. Another popular activity is called Ladies Night—this is where Oxygen Park is reserved only for women during specific hours within the week to allow them to practice their sport comfortably and enjoy some fresh air. Other ladies-only activities can be found on the Education City App.

Built on the site of Doha’s century old trading market, on the banks of the Wadi Musheireb, Souq Waqif feels like an anachronism, particularly against the backdrop of Doha’s dramatic modernist skyline.