A proud land that carries a rich legacy, Qatar celebrates its National Day on December 18, a day of great significance for the country's history.

Qatar National Day, also known as the Founder's Day, is celebrated annually on December 18 to commemorate the country's unification in 1878 and marks the day that Sheikh Jassim Bin Mohammad Bin Thani succeeded his father as leader of the tribes of Qatar.

The holiday was established on June 21, 2007, and was initially celebrated on September 3, the day of Qatar's Independence.

On this day, Qataris decorate their cars and houses by putting on the national flag or other patriotic symbols. The country's flag is a unique combination of national identity and pride, a symbol of significance and belonging.

Qatar is a proud nation. It's a country that has kept its people strong and united. National Day is an annual reminder of the country's core values; loyalty, solidarity and pride. It's a day to get inspired by the past, celebrate the present, and gaze at the future - a promising future that preserves the country's rich heritage and identity.

Each year, various festive activities take place. However, this year, due to COVID-19 precautionary measures, the events are limited to the parade with Qatar's Military and Civil Defense Forces and the Air Show, and at 8 pm, fireworks will light up Doha's sky.

This year's slogan comes from one of the poems of the Founder, Sheikh Jassim Bin Mohammad Bin Thani, and expresses the strength and pride of Qatar's people and the foundations of faith upon which the country was founded.

"We praise you, the Lord of the Throne,

We accept your judgment in all actions."

Sheikh Jassim Bin Mohammad Bin Thani grew up in Fuwairat, north-east of Qatar, under the patronage of his father, Sheikh Mohammad Bin Thani, the most prominent leader at that time. He received a great education, and at the age of 21, he was already a young leader who embraced the idea of unity. He was a man driven by wisdom, prudence, generosity, a man of knowledge, virtue, and a true leader. 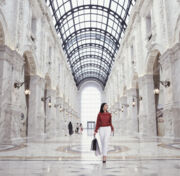