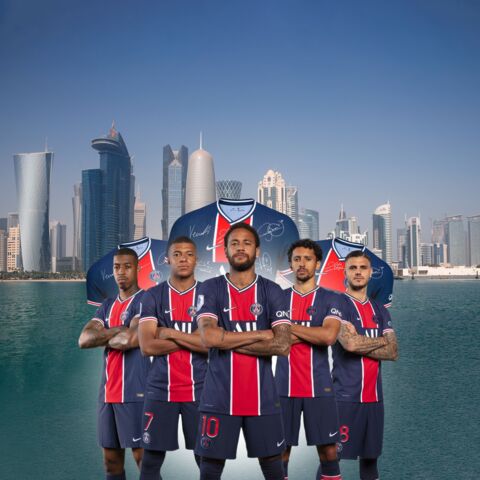 This competition is not associated to any condition or obligation to purchase jerseys on Qatar Tourism . Each participant will have the right to participate or reject the participation on social networks.

The “Jersey Giveaway” promotion (the “Promotion”) is ran by Qatar Tourism (the “Sponsor” or “National Tourism Council” or “QT”). The Promotion and Prizes are subject to these official rules, and by entering the Promotion the participant (the “Participant”) agrees to be bound by the said rules.

2.      The Promotion does not engage or put any liability on any partner as it is sponsored by Qatar Tourism only.

a.   The Promotion is open to citizens and legal residents who are at least 18 years old as of 30th June 2021, have a valid passport or Qatar National ID at the time of participation in the Promotion, and is not a winner from any of Qatar Tourism  prior promotions.

b.   Employees, officers, directors and agents of Qatar Tourism , its subsidiaries, and each of their immediate families (spouse, parents, siblings and children) and their household members are not eligible to participate in the Competition.

To the extent permissible by law, Participants from the following regions may qualify to participate in the Promotion:

All participants must comply with these Official Rules. All interpretations of these Official Rules by Qatar Tourism are final. Qatar Tourism reserves the right to change or otherwise withdraw the Promotion at any time without prior written notice to the Participants. Qatar Tourism shall have no liabilities whatsoever for any claim, loss, damage, cost or expense incurred by Participants or any person including third party claims, however they arise, whether direct, indirect, consequential or other damages resulting from or in relation to this Promotion;

a.   NO PURCHASE IS NECESSARY TO PARTICIPATE OR WIN.

i.   An announcement will be published across the Sponsor’s official social media channels or visiting the dedicated contest page while visiting the Sponsor’s website that inform viewers of the contest. Viewers must visit the link for more details of the Promotion.

a.    Once the Promotion has ended, the Qatar Tourism in Doha will choose winners at random using a randomizer software.

b.  Once the Winner have been selected, they will be contacted via email. One winner cannot win more than one jersey during the competition.

c.    The Winner will have 72 hours to confirm receipt of the message to claim the prize. Failure to respond in the specified time period, an alternate winner will be selected. The Winner must sign a Winner’s Affidavit and Release to be eligible to be awarded the prize.

d.   Sponsor reserves the right to ask for proof of residency in his country or his country of residence to validate the winning entry. Failure to do so will disqualify the winner.

c.   The Prize cannot be transferred, sold, substituted or in any other way dealt with.

d.   If the Prize is not redeemed, within the period set forth in paragraph (e) below, the Prize will be forfeited and Sponsor shall have the right to dispose the Prize at its sole discretion and without incurring any liability whatsoever.

Prizes are provided “as is” and without any warranty of any kind. No cash redemption or prize substitutions are allowed. Sponsor reserves the right to substitute prize of equal or greater value in Sponsor’s discretion or if a Prize becomes unavailable without advance notice. Sponsor shall have no responsibility or obligation to a Prize Winner who is ineligible for a Prize, or is unable to or who does not accept or utilize the Prize awarded, for any reason.

Subject to applicable law, each Winner irrevocably grants Sponsor the right to use the Winner’s name, voice, photograph and/or biographical data for advertising, promotional and/or publicity purposes in all forms of media, worldwide in perpetuity, without any obligation or consideration except for the awarding of the prize to the Winner.

Information submitted in connection with the Promotion will be treated in accordance with these Official Rules and Sponsor's Privacy Policy (as may be amended from time to time.

Except as otherwise expressly set out in these terms and conditions, Qatar Tourism  and its subsidiaries, affiliates, divisions, and its employees, officers, directors, and agents shall not be liable or responsible for any failure to perform, or delay in performance of, any of their respective obligations that are caused by events outside of their reasonable control. Qatar Tourism is not responsible if the promotion terminates or any prize cannot be used or redeemed due to acts of god, war, terrorism, explosions, fires, floods or other natural calamities, bad weather, strikes, riot, civil disruption, internet failures, or other acts of god or the winner, or for any other occurrences which are outside of Qatar Tourism's reasonable control.

a. If this Promotion cannot be administered as contemplated for any reason, Sponsor reserves the right at its sole discretion to suspend, modify or terminate the Promotion, winner selection, or prizes without prior notice.  This promotion is not sponsored, endorsed or administered by, or associated with, Facebook, Twitter, Instagram, WhatsApp, Google, YouTube, Facelift, or any other social media platform.

b. Sponsor will not be responsible for any technical fault or failure which prevents a person from entering.

This Promotion is subject to all applicable laws and regulations in the state of Qatar.  All issues and questions concerning this Promotion will be governed by the laws of the State of Qatar and is void where prohibited or restricted by law.

a. Outside the State of Qatar

Where, in relation to contracts with consumers (being individuals acting in a private capacity), the laws of Your country of residence (“Laws”) require that:

i.The Laws shall apply to any such contract; and

ii.You may bring proceedings in the courts of Your country of residence (“Courts”), then the Promotion and these Terms and Conditions shall be governed by the Laws and shall be subject to the exclusive jurisdiction of the Courts.

b.  Inside the State of Qatar

i.  This Promotion including the terms and conditions in addition to all issues and questions concerning this Competition will be governed by the laws of the State of Qatar, and are subject to the exclusive jurisdiction of the competent Qatari courts.

(c)  Except as provided in these Rules, in the event of conflict between these Rules and any other regulations Qatar Tourism may have dealing with particular subjects, these Rules shall prevail.

Winners are responsible for paying any applicable local taxes on prizes.